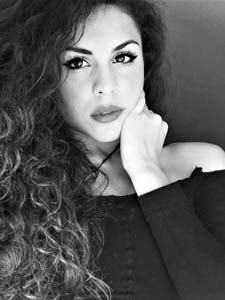 Serena began her dance studies very young (at the age of two and a half) in Syracuse (Sicily), obtaining numerous certificates and scholarships in Italy and abroad in the early years of her training. At the age of thirteen she was admitted to the School of Dance of the Teatro dell’Opera in Rome with a scholarship, where she attended academic courses until 2016. Shortly after she began her activity as a dancer, wshe worked in 2018 on the television program “Domenica In”, broadcast by Rai 1 and, in the same year, at “Sicilia Cabaret “on Rai 2. At the end of 2018 she worked at the Bellini Theater in Catania for the shows “Mi ritorni in mente”,”La Bella Addormentata” and “L’Opera dei Pupi ”alongside Amilcar Gonzalez Moret and Letizia Giuliani. In 2020 she was part of the Corps de Ballet of the Andrea Bocelli concert in Noto, Sicily, and in the same year she participated in a video clip of the musical group Surgarfree. In 2021 she joined the well-known television program “Amici di Maria De Filippi”, broadcasted during the year on Canale 5, where she stood out among the participants of the Dance section by reaching the semifinals in the evening phase of the broadcast. In June 2021 she joined the company of Balletto di Roma, making her debut in the production “Astor. A century of Tango ”, with the choreography of Valerio Longo.