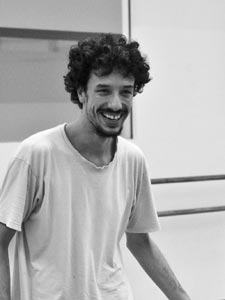 Andrea Costanzo Martini was born and raised in Italy where he received his first education in contemporary dance and ballet. At the age of 19 he moved to Munich, Germany where he attended the Heinz-Bosl Stiftung Ballet Akademien and in 2004 he began his professional carrier as a Ballet Dancer in the Aalto Staats Theater Essen.
In 2006 He joined the Batsheva Ensemble and 2 years later the Batsheva Dance Company. During these years he performed extensively the repertoire of Ohad Naharin and Sharon Eyal and he began his activity as gaga teacher and Choreographer through the “dancer create” program of the Company.
He later joined the Cullberg Ballet in Stockholm where he performed for two years repertoire of Benoit Lachambre, Alexander Ekman ,Crystal Pite, Jefta Van Dinter and Tillman O’Donnel. He created a work for six men of the company ,” For men only” presented at the Moderna Dans Theater in Stockholm and participated in the solo program of Deborah Hay – This empty stage an ocean.
In 2012 he moved back to Israel where he joined the Inbal Pinto and Avshalom Pollak dance company and started creating his own works.
In 2013 he was awarded first prize for both dance and choreography at the International Stuttgart Solo Competition for the solo work “ What Happened in Torino”. Since then the piece has toured extensively.
In November 2014 , thanks to the support of the Zurich Tanzahaus,,Suzan Dellal Center Tel Aviv, Teiva Theater he presented a new work named “Tropical” in Pavillon Noir Aix en Provence, a duet with Matan Daskal (Israel) featuring Video and Light Work of Yoav Barel (Israel)
He later created a solo version of the work, “Trop” presented at the MAAT festival Lublin in December 2014 and later in Gothenburg Sweden in April 2015.
Between 2015 and 2016 he created the works “VOGLIO VOGLIA”, “Filthy Guilty aaaaAAAAHHH” and “Occhio di bue”. In October 2015 he was awarded the audience prize at the Festival MASDANZA in the Canary Islands.
In November 2016 the debut of his latest creation “SCARABEO, angles and the void” , a duet with Avidan Ben Giat as part of the Curtain Up Festival Tel Aviv.
In December 2016 he is awarded the jury’s second prize at the “International Jerusalem Choreography Competition” for the solo “Occhio di Bue”.
In 2017 he debuts with the site-specific work “Solo Bonotto” as part of the Opera Estate Festival at the Bonotto Foundation in Molvena and “Rootchop # 2” and with a work for young Venetian dancers. It is also the beginning of the collaboration with the “Dance Makers” collective supported by the “Center of Contemporary Scene” in Bassano del Grappa (Vicenza) and by the Residence XL network.
In the same year he presented the work SCARABEO in Italy (Polverigi -INTeatro Festival), Sweden (Gothenburg), South Korea (Seoul), and Kalamata (Kalamata Dance Festival).
In November the work SCARABEO, Angles and the Void is selected as one of the AerowavesTwenty 2018 Festival.
In 2018 he creates, on commission, “Emergency Arabesque” for the collective Dance Makers, “INTRO” for the Ballet of Rome and “Balera” for the Ballet Theater of Turin.
It also begins a collaboration, supported by BTT, Piemonte dal Vivo and Charleroi Danse, with the video artist Cindy Sechet for a duet for a dancer and camera “La camera du Roi”. Between March and November he presents his works in the context of an international tour at “TanzHaus Zurich”, “Shanghai Int. Dance Center”, “The Place” – London, “La briqueterie” – Paris, “Les Brigittines” – Brussels and “B -Motion Festival “- Bassano del Grappa among others.
Andrea is regularly working as a teacher and mentor and is choreographing for various groups (Sadna Gaaton, Dafna Szilberg Theater etc). He has been showing his works at the Israeli International Exposure in Tel Aviv and has represented Israel in various Festivals around the World (France, Switzerland, Germany, Sweden, Italy, Lithuania, Spain, Poland just to name few).
He regularly showcases his work in Israeli Theaters and Festivals (Suzan Dellal Center, Tmuna Theater, Teiva Theater, Machsan 2, Intima Festival, Gvarim Iotsrim, Diver Festival).