A Balletto di Roma Production in co-production with Fabbrica Europa 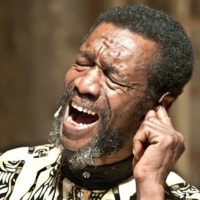 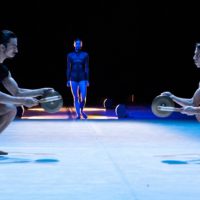 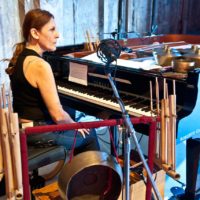 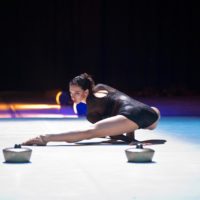 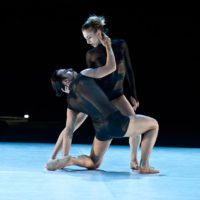 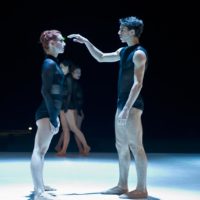 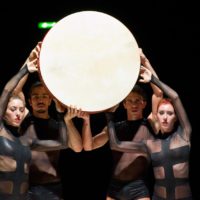 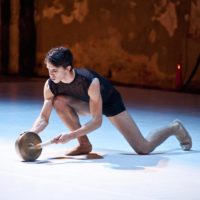 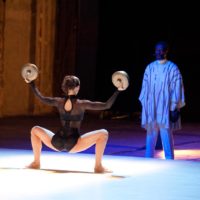 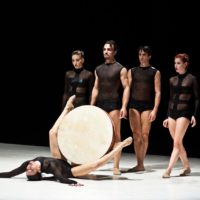 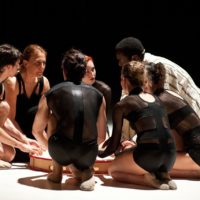 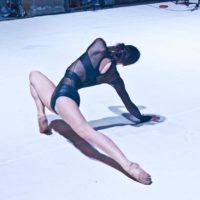 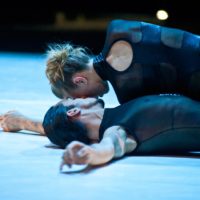 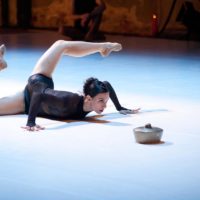 In an empty space, apart from the presence of a piano with other percussion instruments lying on the ground, and in a time perceived immediately as dense, the dancers of the Balletto di Roma encounter the energetic music of Katia Pesti and the fascinating voice of the African singer Gabin Dabiré. The movement of bodies emerging from an umbral cone pass through the tissue of sound to give rise to a solemn dance, recalling the rite as the symbol of both beginning and transience. Three underground melodies, rapid instants of abandon and sensuality, moments that mix harmony and vehemence, music, dance and song lead towards ancestral, mysterious places. The strong vitality resulting is nurtured by the heterogeneous nature of the group and by the mixture of genres, exchanging richness and resonance with one another. This show, with Davide Bombana’s choreographies, samples distant worlds and supplies the spectator with hints of exotic atmospheres. An important physical and sound presence, that of the dancers and musicians on stage, coming together and “clashing” to bring to life a microcosm made up of rhythms, colours and untoward signs. Metaphor of a cultural opening now unstable, Arcaico unveils the attraction to an indefinite origin, a harmony that is utopic and profoundly ancestral. It is a work that is perhaps intended as antidote for and protest against growing intolerance, incommunicability and the deep fear at the root of human relations: a warning to retrieve a forgotten, perhaps not yet lost, opening towards and acceptance of the Other.

Katia Pesti qualified in piano studies at the Reggio Calabria ‘Francesco Cilea’ Conservatoire and attended the piano perfectionist course at the Siena Accademia Chigiana with Guido Agosti. She then obtained the diploma in Music Therapy at the Assisi CEP and in Dance Therapy at the Milan Scuola Civica with Maria Fux, studies she continued in Florence at the Centro Danza e Movimento of Lilia Bertelli. She also undertook studies in electronic music with the composer Alessandro Cipriano at the Istituto di Musica Bellini in Catania. She became fascinated by Asiatic music and in Indonesia she studied the Balinese Gamelan, before attending courses of percussion instruments in Italy, held by the Director of the Strasbourg Percussionists M° C. Hamouy, and the seminars under M° Ben Omar. The results of these courses of study led her to experiment with the possibility of playing the piano and percussion instruments at the same time, thus creating a composition system that was utterly personal, and in which elements of classical language merge with pan-ethnical sonority, thanks to minimalist interlocking, enriched by percussion tone and colour, ranging from the use of the typical Balinese Reyong, to Gongs and Drums. In the Nineties she began her activity as a composer, adding experiences in ethnic and experimental music to her repertory of classical music. In 2013 she was a finalist in the “Franz Liszt” award for composers at the Festival of Bellagio and Lake Como – Centro di Musica Contemporanea of Milan.

Gabin Dabiré was born in Bobo-Dioulasso in Burkina Faso. After some experience in his own country, he travelled through Europe increasing a series of musical experiences. In 1975 he settled in Denmark where he came into contact with European experimental music, and then with eastern music which led to prolonged stays in India, where he got to know the religious, classical and ethnical music of the country, relating to the great masters of Sitar Sarod and Tabla. On returning to Europe, he continued his study of African and Asian percussion instruments, the chordophone, singing and composition. Together with a number of Milan artists he created the multi-media group “Correnti Magnetiche” sounds and images from earliest times to electronic music, with whom he produced “Futuro antico I e II”, “Les Balafons de Haute Volta”, “Les musiques de Haute Volta”, “Afganistan”. During those years, with his group Yelbuna (Sources) he toured throughout Europe, catalyzing great attention from the press and the public. In Italy, his work for the diffusion of African culture is important: in 1984, with the collaboration of Elena Albini Trissino dal Vello d’Oro, in Milan he founded the “Centre for the Promotion and Diffusion of African Culture”, under the patronage of UNESCO, for the development of literature, cinema, theatre, dance and music. After creating the most important manifestations on Africa still thriving in Milan today, he decided to devote himself exclusively to his music, and in 1987 he moved to Tuscany. Eclectic personality and multi-instrumentalist, he moves from chordophones to percussion to ethnic instruments.