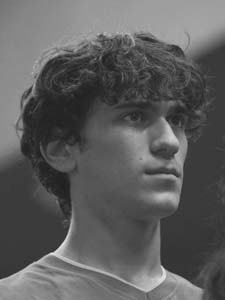 Born in Popoli (Abruzzo), Marcello trained at the “Centro Studi Danza Città di Popoli”. In 2016 he moved to the capital to attend the academic courses of the School of Ballet of Rome directed by Paola Jorio. At 17 he began to take part in the shows of the Junior Company of the Ballet of Rome, in particular he is among the interpreters of “Coppelia” in the performances of the 2017/2018 season. At the end of the academic courses, he was selected by the artistic direction to be part of the CAP-Professional Startup Course of the Ballet of Rome, with which he is involved as an interpreter in new professional experiences: in September 2020 he was among the four dancers protagonists of “Glitch , here we go again ”, choreography by Giselda Ranieri (fruit of the synergy between Balletto di Roma and Network Anticorpi XL as part of Prove d’Autore Project), staged in Ravenna for Ammutinamenti Festival. In the same year, he participated in the filming of the film “Come un gatto in tangenziale 2” (directed by Riccardo Milani) in Rome, interpreting an extract from the production “Romeo and Juliet” with the dancers of Balletto di Roma. In February 2021 he starred (with Isabella Minosi) of “The Little King of Flowers”, a co-production of Ballet of Rome and Teatro Gioco-Vita (with debut at the Teatro dei Filodrammatici in Piacenza). In May 2021 he took part as a dancer, together with his colleagues from the CAP and with the choreography of Valerio Longo, in the international video production entitled “Metanoia”, polyphonic music project, codesigned by renowned Italian-Brazilian conductor Simone Menezes, the musicians from her chamber music ensemble “K”, and sponsored by Cartier, shot at the Antico Teatro in Sabbioneta. Since June 2021 he has been apprentice in the Company of Balletto di Roma.