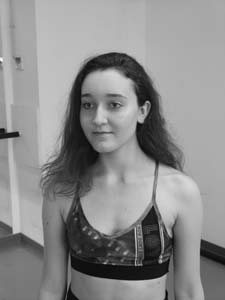 Born in Sarzana, Liguria, Isabella began her dance studies with Emmanuelle Ricco at the La Maison de la Danse Academy (La Spezia). In 2014 she moved to Massa Carrara, in Tuscany, to study classical and modern dance with Lorna Wilkinson; in the same year she attended pre-academic courses at the International Choreutic Academy of Florence with Elisabetta Hertel. Later, until 2019, she attended the Ukrainian Academy of Ballet in Milan, where she graduated as a dancer with the masters Elena Tsarikova, Egor Scepaciov and Oxana Beliaeva. She had several experiences on stage already during the years of study: she played solo and ballet roles in the representations of some of the most famous ballets of the classical repertoire and dance in numerous shows and creations such as “Waltzer”, choreography by Elena Tsarikova for the Ukrainian Academy of Ballet; “Snow white and the seven Dwarfs” with the Ukrainian Ballet at the Manzoni Theater in Milan; the variations from “Le Corsaire” and “Tchaikovsky pas de deux” on the occasion of the XX and XXI edition of “Danzando sotto le stelle”; Concert at the Schuljahresabschluss Dance with Academy Bottaini Merlo International Center of Arts in Munich; Grand Gala of Dance, in Adria, with the Ukrainian Ballet. Between 2011 and 2019 she participated in important international competitions, winning the podium and the finals. During the years of study she also attended numerous internships and intensive professional courses with the professors and choreographers of the most important academies and dance companies, among them include: International Senior Summer Intensive at Academy of Northern Ballet; DanceFlash Europa Ballet; “The French Style in Dance” with the masters of the École de Danse of the Opéra de Paris and Dutch National Trainee Program Amsterdam, Rome (2018); Summer Dance Intensive with Sun Hee Dieben from Codarts Rotterdam, Livorno (2018); Summer School of the Ballet of Rome (2018); Summer intensive with Alen Bottaini, Istvàn Simon, Eliane Mazzotti, Thierry Parmentier, Vicenza (2017); Stage with Andrey Batalov and Mariana Rasu, Vienna (2016); Internship at the Escuela de Ballet Ruso Nazarenco, Madrid (2015); Internship with Tania Fairbairn, The Royal Ballet School (2014); Summer course at Staatliche Ballettschule, Berlin (2014); IbStage Summer Intensive, in Barcelona, with the masters and dancers of the Teatro alla Scala and the American Ballet Theater (2013). Among her most recent professional experiences: in the 2019/2020 season she was a soloist in the productions “The Nutcracker” and “Snow white and the Seven Dwarfs” of AUB Compagnia Italiana di Balletto at the EcoTeatro in Milan; in 2020 she is in the corps de ballet of “Caravaggio-Amor Vincit Omnia”, Lyric Dance Company production for Florence Dance Festival (Florence). Selected by the artistic direction of the Ballet of Rome, she joined the CAP-Professional Startup Course and in February 2021 she starred (with Marcello Giovani) of “The Little King of Flowers”, co-production of Ballet of Rome and Teatro Gioco Vita with debut at the Teatro dei Filodrammatici in Piacenza. In May 2021 she took part as a dancer, together with his colleagues from the CAP, in the international video production entitled “Metanoia”, polyphonic music project, codesigned by renowned Italian-Brazilian conductor Simone Menezes, the musicians from her chamber music ensemble “K”, and sponsorized by Cartier, shot at the Antico Teatro in Sabbioneta.Since June 2021 she has been apprentice in the Company of Balletto di Roma.